It’s difficult for our animals to communicate with us, so it’s important to know any symptoms our cats display which could need immediate medical attention. Use the following as a loose guide to identify the signs of a sick cat and when it might be time to take them to the vet.

Prolonged spells of vomiting or diarrhea could be a sign that your cat or kitten has a parasite or dangerous stomach obstruction. Take them to the vet if they don’t seem to be able to keep food down or produce a solid stool. Cats naturally throw up from time to time, particularly from hairballs, and eat things they shouldn’t, so a one-off isn’t much to be concerned about.

It could be a sign of a dangerous obstruction if you have a tom cat and he seems to have trouble peeing, seems pained when trying to go, is urinating outside the litter box, or is only producing a little urine. These symptoms in male cats need immediate attention as they can lead to kidney failure or possibly a ruptured bladder. Although unlikely, if your female cat displays any similar symptoms to an extreme degree, it’s still best checked out by a veterinarian. 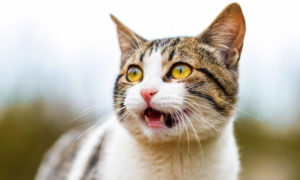 Your cat’s gums should be moist and pink if they’re healthy, just like yours. Discoloured gums in cats can be a warning sign of multiple serious diseases and conditions, none of which should be ignored as they need immediate medical attention.

If your cat’s dragging their back legs, you should seek immediate medical attention. This is a condition called aortic thromboembolism. It’s common in cats with heart disease when a blood clot becomes lodged in the back legs. This causes extreme distress as the legs are paralyzed. 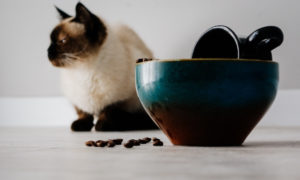 It’s fairly common for cats to go a few hours, even a day, without eating, as they generally suit themselves. However, you know your pet. If your cat suddenly changes their eating and drinking habits and ignores them entirely. If this continues for more than 24 hours, take them to the vet.

We’ve all heard the phrase “cool cats,” as they’re typically relaxed, stoic creatures. If your cat seems jittery all of a sudden without an obvious environmental cause (noise, another animal, being scared by strangers, people arguing around them) you can tell something is wrong. They may cry, howl, hide, or act in another way that’s out of character. This can be a sign that they’re feeling unwell and can’t show you any other way.

Many lumps and bumps turn out to be benign, but it’s best to be certain. It’s impossible to tell without an examination. The swelling still might be causing your cat pain or discomfort even if it’s harmless, so your veterinarian might elect to remove it. 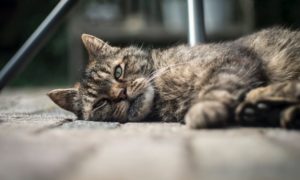 Cats are not as energetic as dogs, with many of them being lazy and making us all wish we could lie around the house all day. Try tickling their nose with their favourite toy or a piece of string. If they won’t rise even to play with something that usually engages them, that’s a sign of genuine cat lethargy. This can be a sign of several severe conditions where cats need immediate medical attention.

Respiratory issues in cats could be a symptom of disease, tumours, parasites, or exposure to a toxin. If your cat starts making strange sounds, has clearly laboured breathing, is taking more breaths than usual or in quick succession, or their breathing appears shallow, you need to take it seriously.

Any kind of unusual discharge from the nose or eyes can be a bad sign. If it comes at the same time as panting, sneezing, or shortness of breath, it could be a signal that your pet has a respiratory infection. Act fast if you observe this combination of symptoms in your cat.

Photo by C. SHII on Unsplash

Photo by Jacco Rienks on Unsplash

Photo by Dagmara Dombrovska on Unsplash

Photo by Ariana Suárez on Unsplash

Getting a Pet Turtle: Everything You Need to Know

Why is My Cat Meowing So Much? And Other Weird Noises

Groom Your Pets: What My Cat Taught Me About Self-Worth

Adam - May 19, 2022
search
Type your search
report
No results for your search.